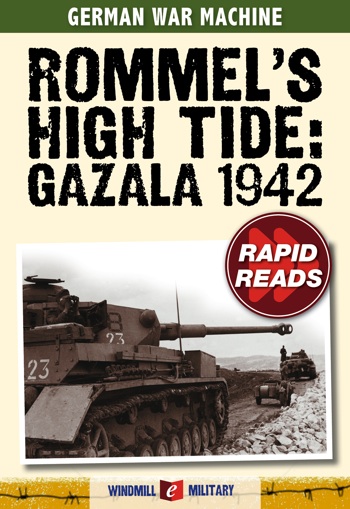 The first days of 1942 found Erwin Rommel – the ‘Desert Fox’ of the North African campaign – back where he had begun his campaign a year earlier in El Aghelia. Though he had carried out a masterful fighting retreat, the British winter offensive (Operation Crusader) had wiped out all the gains he had made in 1941 and reduced his Panzer force to fewer than 50 working vehicles.

Within a few weeks, however, Rommel’s Afrika Korps was back on its feet. Boosted by reinforcements and new equipment recently arrived at Tripoli, Rommel’s men counterattacked against the overstretched British forces, pushing them back towards Benghazi. By February, however, the suprise factor of Rommel’s offensive had worn off and he found himself stuck in front of a heavily fortified British defensive line at Gazala. Nothing short of a stroke of tactical genius was required to break through the line, a stroke of genius that was to come on 26 May, when Rommel’s forces began the daring flanking maneuver that started the Battle of Gazala.

This book looks at the planning and execution of Rommel’s most famous battle, as well as the lightning offensive that followed. This book also looks at the nature of Rommel as a commander, and how this shaped the uniquely fluid fighting of the North African campaign.